Chasing this theme, we can be flexible to combine several mosques in accordance with the interests shown by the visitors and regarding the time given. In Istanbul the architectural legacy exceeds the boundaries as its model was the phenomenal Hagia Sophia, which had been also very unique in the world of Christianity. The stylish applications of authentic arts like calligraphy or tile works would be another satisfying part about the cultural background of the Capital. Besides, the functions of such mosques as urban centers, in relation with the hierarchy among them, will be taken into account.
For instance, it would be introductory if it should be about the genius architect “Sinan the Great“. Or the ones converted from Byzantine Churches seems like another striking subject since there are several mosques in Istanbul once served as Church. Otherwise, the focus could lie on a district in/around the city, or a certain era in the past. After all, what is certain is that Istanbul is going to be generous for presenting the best examples of Muslim Architecture between 16th to 20th centuries.
Here are just a couple of best examples such as Suleymaniye Mosque, Sultan Ahmed, Nuruosmaniye, Mihrimah Sultan Mosque…

The colonnades, the courtyard of the Blue Mosque (the Sultan Ahmed Mosque)

exterior of the inner courtyard of the Suleymaniye Mosque, 1550’s 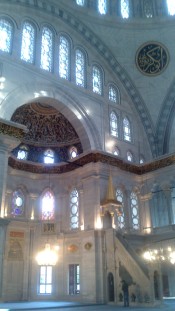 the New Mosque (front) and the Suleymaniye Mosque (back)